So many people think of diversity as being defined by race, religion, or sexuality, but I believe it is so much more than that. I think we can broaden the definition of diversity and slow the way that people are marginalized by these terms. I think it’s about engaging in creative and innovative experiences to open our eyes to what diversity really means.

I have been lucky enough to experience two creative exercises that changed the way I view diversity. I’d like to share them with you and then take a step back to define what made the situations successful and how we can build on them to foster a deeper appreciation for diversity. The first was an exercise I was able to participate in during my college freshmen orientation and the second was more recently with an initiative at my workplace. I think both serve as valuable lessons for the impact that creativity and innovation can have on the way we all view diversity.

My intrigue for diversity began at a moment when I least expected it. I arrived at my college freshmen orientation in August of 2008 expecting to browse through course catalogue, mingle with incoming students, and maybe get a tour of the campus I’d call home for four years. I did indeed receive all of that, but the unexpected gift came in a “special activity” that was planned for Friday night of the orientation weekend. Our orientation leaders casually led us into the auditorium where we were greeted by Tyrone Black, the university’s then Director of Multi-cultural Affairs.

Tyrone Black was the creator and facilitator for a term he coined “The Weights of Reality”. The lecture started off really light hearted. He was captivating and everyone in the room was drawn to his energy. After the introduction, the mood took a turn to a more serious note. He went on to discuss weights that we all carry around. There were symbolic weights made from styrofoam cups and string sitting at the front of the room. I remember there to be thousands of them…. 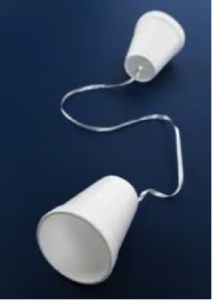 He started off only scratching the surface. He asked who carried around the weight of having too much homework, or needing to find a summer job. As he went on the topics got deeper. He asked about people carrying weights of prejudice, family stress, financial strains, disabilities…

Each time he mentioned a new weight that people carry he would add one of the weights made from styrofoam cups and string around his neck. As you can probably imagine, the site of a man with fifteen Styrofoam cups hanging from his neck was somewhat amusing, but he was so engaging and committed to the activity that it held everyone’s attention. We were all sitting at the edge of our chairs waiting to hear more and get to the punch line of the lecture.

My group of ten was lead to a small conference room on the other side of campus where all the chairs had been previously pushed aside. There was a big enough space left where the ten freshmen, plus our two orientation leaders could sit comfortably in a circle on the floor. In the center of the circle was a pile of the styrofoam weights.

One of the leaders began….

She placed about five of the weights around her neck

As she got through each part of the dialogue she would remove one weight at a time from around her neck – symbolizing the weight being lifted. When she was finished she turned to the ten of us, who up until that morning had been strangers, and asked if anyone would be willing to “carry” one of her weights. There were multiple people who raised their hands and then took one of her styrofoam weights away from the pile that sat in front her.

When she was done she turned to us and said “well now that you have all helped to carry my weight, I’d like to hear your story and see how I can help to carry yours.”

That next hour changed my life. Each person went around the circle and shared pieces of their lives that were extensions of who they were. The weights were all things below the surface that you would never be able to tell from simply looking at them. At the end of each person’s story, we volunteered to carry the weight for the piece we felt the most connected to. It was remarkable to see the way that strangers were capable of lending help to ease other’s pain.

I had never in my life felt comfortable sharing my own story, but the symbolism of the exercise, and the openness of the people in that room gave me the courage to speak up.

The stories I heard that night are not ones that need to be retold. The point remains the same regardless of what stories were shared. Diversity is what makes us who we are. For that hour of my life, the skin color of the guy who sat to my left and the religion of the girl who sat to my right didn’t matter. They were the farthest things from my mind….

What mattered was the stories that each individual shared and the way that people stepped up to the plate to serve a new classmate that would bond them not only for the first week of class, first semester, or 4 years of college, but for the rest of their lives.

Needless to say, the following year I was the first to submit my application to be an orientation leader and have since lead hundreds of students to the same revelation.

The Weights of Reality was an innovative exercise that changed the way thousands of college freshmen viewed diversity. It set a tone for the kickoff of an amazing college career filled with acceptance and appreciation for the people that surround you.

The second example of creativity and innovation in diversity that I have experienced is not one that I got to participate in myself, but I was able to see the impact that a diversity initiative had on my work place more than a year after it occurred.

I am currently working Talent Acquisition for one of the largest hospital system in New York City. It’s a big place and there are a lot of initiatives that take place on a daily basis that many people aren’t even aware of.

I had heard whispers around campus about an initiative that was carried out almost a year prior called “A Walk in Their Shoes”, but I hadn’t learned about it up close. It turns out that our director participated. The idea behind a “A Walk in Their Shoes” was that two hospital employees would swap job responsibilities for the day (ideally employees from polar ends of the job spectrum) so they could better understand one another and hopefully have a fresh perspective on the organization’s mission to provide an excellent standard of care to the patients.

The director of talent acquisition was paired with one of the housekeepers who was based on one of the inpatient units in the hospital. The housekeeper’s responsibilities consisted of clearing patient’s bathrooms, mopping floors, changing sheets etc. In any other environment where a housekeeper serves his or her function, the impact is arguable not substantial, but in a hospital environment the patient’s health is at risk. For the sake of the patients, every toilet, sink and door knob needs to be completely disinfected.

My director, although a lovely woman, is not one you would easily imagine scrubbing toilets on her hands on knees, but for that day, she committed to the project and fulfilled her job with pride. The housekeeper who served as her mentor for the day made a lasting impression on her, and she in turn, made a lasting impression on us. The housekeeper came as a guest speaker to one of our staff meetings nearly a year after “A Walk in Their Shoes” occurred and the impact was still evident.

My director threw her arms around this woman as she entered into our conference room. They have, ironically, or not so ironically, formed quite the friendship. Our director inviting this woman as a guest speaker to our talent acquisition staff meeting delivered a central message. Every job talent acquisition hires for at the hospital is important. The housekeepers who keep the patient’s room clean so they don’t catch any infections could be equally as important as the nurse of doctor who treats the patients clinically. The second piece of the message that she delivered is that we shouldn’t judge people based on their job title, educational background, credentials, or status.

I can assure you after that day and hearing the explanation of why her job is so important, I no longer dreaded filling the housekeeping positions that came across my desk. To be quite honest, I now get excited to fill those positions. It is rewarding to hire a diamond in the rough and a person who is equally as committed to the hospital’s mission and the patients as the doctors are. The enthusiasm that many of them bring to their positions is contagious. They are appreciative of the job responsibilities they fulfill because it is their way to make a huge difference. It sounds like a pretty respectable job to me…. Or at least it does now after having the chance to see the results of “A Walk in Their Shoes”.

So, I’ve had the opportunity to share two experiences that broadened my view of diversity. Although “Weights of Reality” and “A Walk in Their Shoes” happened years apart, in different states, run by different people, and at different points in my life, the creativity and innovation of both is what made a lasting impression.

I think we still have a long way to go as mankind when it comes to diversity. Talking and sharing opinions is great and I think every bit will help to change perspective, but in my opinion, the things that make the largest impact, are ones that change you in ways you’d never expect.

I took some time to reflect about the aspects that made these two experiences so successful in changing my thoughts on diversity. Here is what I came up with…

If you are ever in the place where you have the chance to develop an activity that will impact people’s views on diversity, I challenge you to think about that list. How can we all continue to think creatively in the evolution of diversity in the hopes of changing the world around us?

Melissa Marsh is Talent Acquisition Recruiter at New York-Presbyterian Hospital, and is an aspiring D&I professional