The Golden Rule Needs an Upgrade? 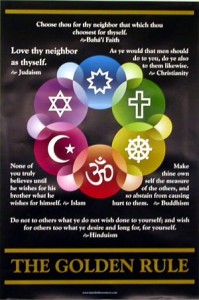 “Do unto others as you would have done to you.”

That’s the Golden Rule. Growing up in Pennsylvania in a Christian home, I heard this repeated hundreds of times. In church, school and at home. It became embedded in my thinking. I was told that Jesus shared this advice, and that I should use it as baseline guidance for how to make decisions in my life.

It has served me well over the years to ponder: That thing I’m getting ready to do or say… how would I feel if the same behavior or language was directed toward me?

Not so fast! In the interest of full inclusion, here’s a quick peak at the historical, cultural and religious sources of this law of reciprocity, which wasn’t called “golden” until 1600 in England, historians say.

Here is where we have seen it show up:

“Never impose on others what you would not choose for yourself.” — China, Confucius, c. 500 BC

“Hence, (keeping these in mind), by self-control and by making dharma (right conduct) your main focus, treat others as you treat yourself.” — Ancient Indian Sanskrit text of Mahābhārata

“That nature alone is good which refrains from doing to another whatsoever is not good for itself.” — Persia, Pahlavi Texts of Zoroastrianism, c 300 BC – 1000 AD

“Therefore all things whatsoever ye would that men should do to you, do ye even so to them: for this is the law and the prophets.” — The New Testament of the King James Version of the Bible, Matthew 7:12

It turns out the Golden Rule is ancient wisdom with global and nearly universal acceptance! But let’s approach this with inclusion in mind.

All respect to ancient and modern religious texts: It’s time for an upgrade.

What if the other person doesn’t want to be treated the same as you? The rule as we learned it makes the assumption that what is good for me is probably going to be welcomed by you. Is this accurate?

Let’s look at an example.

I like to be called out in front of my peers and colleagues and acknowledged for an accomplishment or special effort. There, I said it! It’s been that way since I was the trumpet soloist in junior high school in Lemoyne, Pennsylvania. After my solo in jazz band, the crowd would applaud, my chest would swell, and I’d practice even harder before the next concert. I liked the spotlight.

My father inspired it. If he ever saw me deflecting a compliment from a neighbor or family member, he would tell me to puff my chest, smile and thank the person. I became comfortable with being recognized, even in front of large groups.

Now, the Golden Rule tells me that if I’m managing someone who does a great job, I should consider recognizing them in a very public forum. That’s how I would like to be treated. But some people are shy, humble or appreciate privacy. They don’t want what I want.

The Golden Rule is a great starting point. But inclusion calls for an upgrade. Let’s call it the Platinum Rule. “Treat Others the Way They Want to be Treated.”

This is where inclusion comes in. We develop that relationship, display respectful curiosity and learn what matters to other people. You’ve heard it so many times and in so many ways that “one size does not fit all” when it comes to leading and partnering with others at work. No two people see the world the same way, have the same preferences or like exactly the same treatment in the workplace. Rather than using your own frame of reference, apply the Platinum Rule framework to be more inclusive and effective.

What do your colleagues, teammates or direct reports really want? Find out. Create a short survey and get some Platinum Rule data.

Give your teammates permission to give you feedback if they feel that you could have handled a situation differently and more effectively. Remember, “Intent rarely matches impact.” Allow open communication. How did it feel for them to be asked these questions?

For every Golden Rule or Platinum Rule concept, no matter what the results are, there is a Silver lining: You’re getting closer and closer to fostering an inclusive environment.