How to Be an Ally When You Witness a Micro-Inequity

My 83-year-old mother is a creature of habit. I know where I get it from. It’s our habit to go out to dinner once a month in the small town she now lives in just a few miles outside of Atlanta. We always go to the same place and order the same things.

One Sunday when we entered “our place,” there was an African-American woman, probably my mom’s age, already standing at the host stand – and no host. Within a matter of seconds, a very energetic young woman arrived, looked directly at my mother, who is white, and asked, “table for two?” Imagine my pride when Mom said, without missing a beat, “Yes, but this lady was here when we arrived.” The host then turned, warmly acknowledged the other woman, and ushered her to a seat.

It may seem like a small moment in time, but these things matter. Knowingly or not, Mom used her “white privilege” and exhibited ally behavior. Perhaps the host, who was white, attended to the white party before the African American woman out of simple confusion, but this dynamic is worth exploring.

What is an Ally? 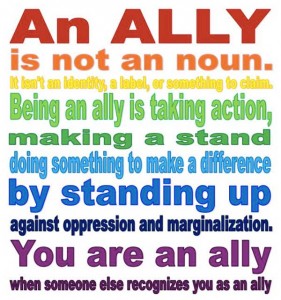 Allies are those that support others, even when it comes to micro-inequities –seemingly small and perhaps unintentional slights. Mary Rowe of MIT is often credited with creating the term “micro inequities,” building on the work of Chester Pierce on “micro aggressions”. Rowe defines micro-inequities as “small events which are often ephemeral and hard-to-prove, events which are covert, often unintentional, frequently unrecognized by the perpetrator, which occur wherever people are perceived to be ‘different’.”

In my example above, the noticeable difference was skin color. Other examples of micro-inequities include:

I’ll never know for certain if our host simply didn’t see the other woman standing there or was operating out of an unconscious bias, but Mom’s pointing out the fact models a tool anyone can use when we witness these small slights.

How to be an Ally

First, POINT IT OUT. Describe what you just saw or heard, using non-judgmental, behavior-based language. In our case, this step was enough to handle the situation. Sometimes, you’ll want to be prepared to do more.

Second, CHECK IT OUT. Ask or invite the micro-offender to interpret their own behavior. You can ask, “Did you notice?” or “I was wondering what was going on for you?” or “Were you aware?” These questions are designed NOT TO BLAME OR SHAME, but rather to engage the person in noticing.

I think it helps here to remember the words of Mary Rowe, that the offending behavior is often “unintentional and frequently unrecognized by the perpetrator.”

Finally, if the relationship is an ongoing one, it may be helpful to WORK IT OUT – determining how to handle similar situations in the future.

Of course, not every situation you witness may be a micro-inequity in action. And, as a member of dominant groups – white, male, person without a disability – I can use my power & privilege to draw attention to these types of behaviors, without non-dominant group folks always having to be the “angry one”. So, I invite my dominant group brothers & sisters to be aware, pay attention & look around you. Think how you’d like to receive feedback if you were the one offending, intentionally or unintentionally.   I draw inspiration from Ta-Nehisi Coates, national correspondent for The Atlantic and author of Between the World and Me. When asked by majority group folks, what would you have us do? Coates offers, “I’d have you be a conscious citizen of this terrible and beautiful world.”